Comprehensiveness of invoicing is overlooked at many companies. ‘We earn our money at the cash tills in the stores,’ says Dirk van der Werff, group control director of Maxeda DIY. ‘Primarily, we play the retail game. In doing so, we often reach agreements with suppliers that once certain volumes are reached, certain benefits are to be gained. We suspected that there was unclaimed value in there somewhere.

‘We felt that the invoicing of our suppliers was not fully comprehensive and certain benefits that we had agreed with our suppliers were not being invoiced,’ says Dirk van der Werff, group control director of Maxeda DIY Group. ‘Invoicing simply isn’t our core business. We earn our money at the cash tills in the stores. Comprehensiveness of invoicing is a sideline.’

‘And so we arranged for a recovery audit,’ Van der Werff continues. ‘We had a specialised party check the comprehensiveness of our purchasing bonuses invoicing. We requested that they establish the connection between registration of our purchasing contracts and the invoicing process in order to check whether it was complete. The Recentes recovery team checked the contracts up to five years back, to evaluate our invoicing entitlements, and used downloads of invoices to determine whether everything had indeed been invoiced. It was all done manually. As we suspected, not everything was complete. We then discussed the situation, both with Recentes and with our suppliers. In certain cases, this resulted in additional invoicing.’

Eye for the relationship with the supplier

‘What the recovery team did really well,’ says Van der Werff, ‘is that they worked with an eye for our interests, but also for the relationship with the supplier. Sometimes the contract contains certain conditions which you would actually rather change, for certain reasons. When working on the basis of no cure, no pay, you might expect the emphasis of the recovery to be on maximum possible invoicing, but that was certainly not the case. Instead, we had effective ongoing consultations about the best possible approach. After all, it’s not always easy to present a third party with an additional invoice at a later date.’

Van der Werff continues: ‘Recentes also advised us on how to register this more effectively in the future. As a result, we have now implemented a contracts database tool in the Netherlands, which we already used in Belgium. A simple press of a button now suffices to check whether we are up-to-date with invoicing all our agreements with suppliers.’

‘Our Belgian colleagues already had a workflow tool for contract management,’ says Van der Werff. ‘While the tool may look old fashioned, it has state-of-the-art capabilities. This tool ensures that contracts are signed digitally, that the purchasing value is agreed with the suppliers and that invoicing takes place using the system. The recovery team also conducted an audit in Belgium, where they found very little opportunity for improvement. We have therefore introduced this tool throughout the company now. In principle, we already apply identical systems in all countries, using the same cash till systems everywhere for example. That simplified the implementation process.’

Contract management still needed to be effectively arranged in the Netherlands. ‘SAP, with which we work, apparently has a tool,’ says Van der Werff. ‘But there’s nobody on the market offering a total solution. Yet it concerns a substantial component of our results. When a contract condition requires a certain performance in return, somebody needs to signal once the performance is complete, so that invoicing can take place. And that was sometimes forgotten in the past.’ ‘A buyer might agree with a supplier that we receive a bonus if they are allowed to introduce fifty new products. Once those fifty products have been introduced, the buyer needs to inform us that an invoice can be sent. There was room for improvement in these types of special cases.’

Although this does not concern the lion’s share of the purchasing benefits of the DIY retailer, considering the amounts involved, asking someone to check them is certainly worthwhile. ‘SAP does send invoices for ‘standard’ purchasing benefits,’ adds Van der Werff. 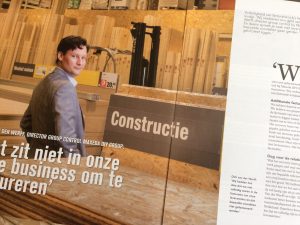 Besides implementing the tool, the contracts themselves have also been redefined, explains Van der Werff. ‘We now try to avoid the situation whereby we must manually detect any performance to be supplied by us. We now invoice certain amounts at certain times. That makes the system simpler. Even if that entails a certain performance: once it has been invoiced, at least you have started a dialogue with the supplier. It’s also tricky to have the system automatically detect purchasing benefits when these only concern specific components. For example: an agreement regarding white paint with a certain supplier. It’s much easier to agree on a percentage for the entire range. You can make a reasonable estimation of the percentage of white paint you sell, and then automatically invoice that. We’re now making changes in relation to these two aspects. But it will always be part of a commercial agreement of course.’

Reaching agreements with suppliers is of course mainly the domain of the buyers. How have the latter been included in the process? ‘Establishing contracts with suppliers has now become largely standardised. And where there is no standardisation, a special team makes the agreements. They have an umbrella function for all categories and have been given more and more responsibility over the years,’ explains Van der Werff. ‘The combination of more standardisation and having a central team, has helped us achieve a more uniform system. That’s more effective.’

‘We’re making good progress,’ says Van der Werff. ‘However, it’s still tricky to get a grip on the agreements for a certain brand that is featured in a brochure, for example. If a brand is advertised in a brochure, the supplier pays a certain amount. But that amount varies depending on the type of exposure. This makes it complicated to get an effective grip on things. What we would still like to learn is to look carefully at cases of individual agreements and minimise them as much as possible. But on the whole, I believe we’ve come a long way. Of course invoicing simply isn’t our core business. I can, however, recognise the signals nowadays. Wherever I am, I’m immediately aware of how well organised it is.’

Dirk van der Werff (aged 35) studied economics at Groningen University, and is an RA and RC (VU University). As group control director, he is responsible for the central business and financial control activities. Van der Werff has been with the Maxeda DIY Group for 6.5 years, following 5 years as an accountant at KPMG. He is married and has 2 children.

Also read: Actually achieving agreed conditions, is that your top priority too?